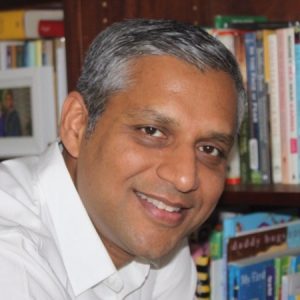 Sab Kanaujia is a globally recognized entrepreneur, executive, advisor and investor in the digital technology industry. During his two decades working with Fortune 200 firms and disruptive startups in US, Europe, Asia and Latin America, Sab launched several path-breaking global digital ventures like Hulu and TMZ, and played a key role in the digital disruption of the media & entertainment industry. As a startup founder, executive, advisor and investor, he has been involved with twenty-two companies over this period, ten of which have had successful exits, including four IPOs (NASDAQ and NYSE). He has held executive roles with Secret Cinema (Interim CEO), NBC Universal (GM/VP, Digital Product Strategy & Development), AOL (Director, Corporate Development, Video Product Strategy), among others.

Sab is committed to creating similar transformative value in the healthcare industry that is ripe for fundamental digital transformation. Digital Health is his primary focus. He launched Dia Ventures, a startup advisory and investment firm based in New York City, that is filling a key gap in healthcare innovation through technology entrepreneurship. Dia Ventures combines domain knowledge in the healthcare industry with expertise in building transformative digital products and scalable businesses. It provides critical high-touch support to healthcare industry entrepreneurs, equipping them with the proven digital playbook that previously transformed other industries using technologies like big data, AI, mobile, cloud computing, messaging and video. As a New Yorker since 1998, he is excited to see the phenomenal growth of the City’s entrepreneurial ecosystem. Sab is committed to making New York City the country’s premier ecosystem for digital health. He lives in Manhattan with his wife and two daughters.